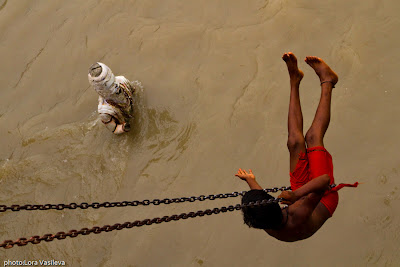 India - the country of wonders. Here anything is possible and sometimes seems absurd or even surreal. You can leave all logic learned in the Western world and plunge into the story. Our story has just begun but already our 6-month visa seems too short to get to know this diverse country.

We crossed the border in the Sounali by walking and with the first steps we faced with the noisy crowd, a mix  strong smells of gasoline, sewage, fried food, carrion and human sweat. We did not want to spend the night here and we caught a night bus to Lucknow. From there we took the train to DeraDun - second class. We heard all sorts of horrors on Indian trains second class - human storage, cans for people ... Indeed, the station was crowded with thousands of people - sleeping, lying, squatted, waiting, but for our Bulgarian standards it was very decent and clean. Even the first stations I could sleep on three seats, and Evgeni slept throughout the whole journey on the luggage shelf, which was quite wide and solid - almost like a sleeper class. 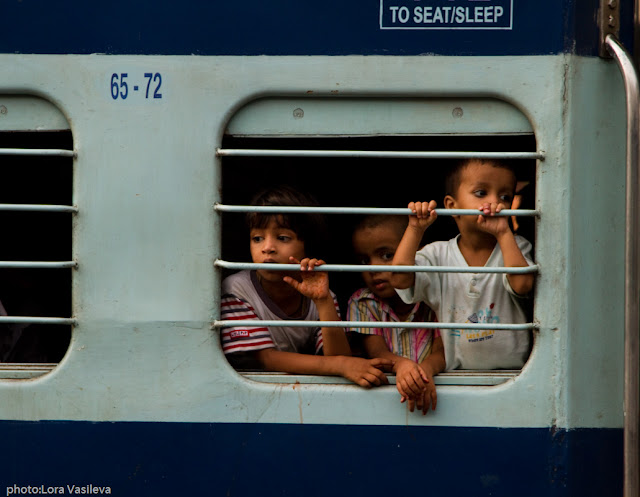 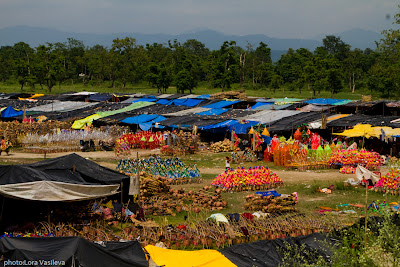 Spontaneously we decided to get down earlier in Haridwar - one of the holiest cities on the holy river Ganges. It turned out that now is the month of Shiva - Kawand Mela and thousands if not millions of people from northern India walked to the Ganges to bathe in holy water and purify themselves. We had never seen such a crowd, even in the largest music festivals. The wide streets were filled with people dressed in orange, shouting "boom, boom ", singing and happy. Along the river there was a huge Camp where sadus had made their temporary ashrams. Of course, all guest-houses and ashrams were filled to the brim and we walked long hours before we found where to sleep. Finally we stayed in an ashram on the outskirts of the city that was more like a hotel, but at least there was delicious food, cozy library and a large yoga hall. We were the only foreigners in the ashram and the only visiting the library and the yoga hall. It was blissfully quiet compared to the madness outside. When we went out for a walk to the river we had to dive boldly into the sea of ​​orange pilgrims trying hard not to lose each other. 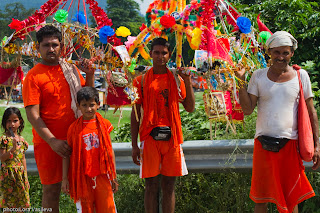 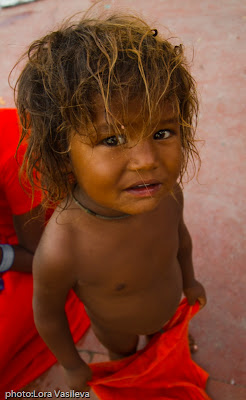 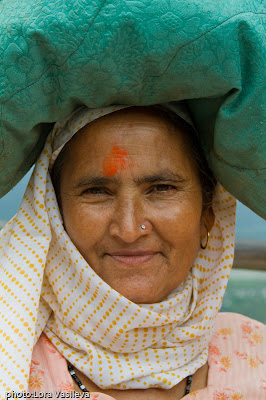 Tattoos are made quickly and clumsy directly on the street 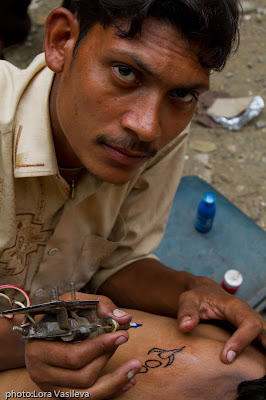 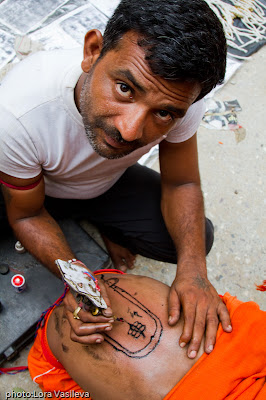 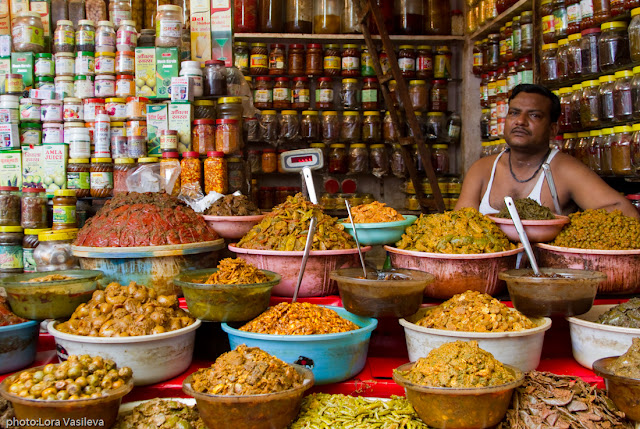 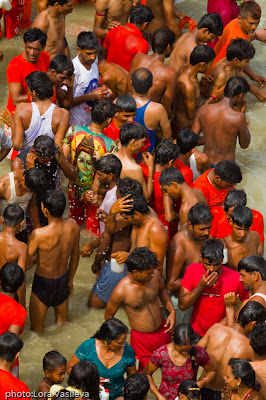 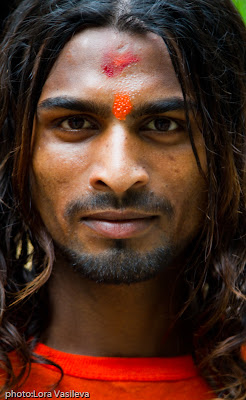 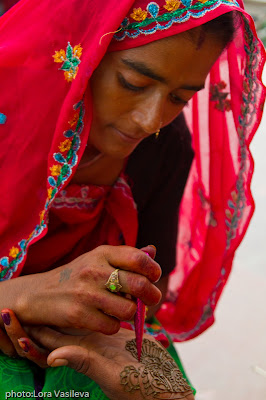 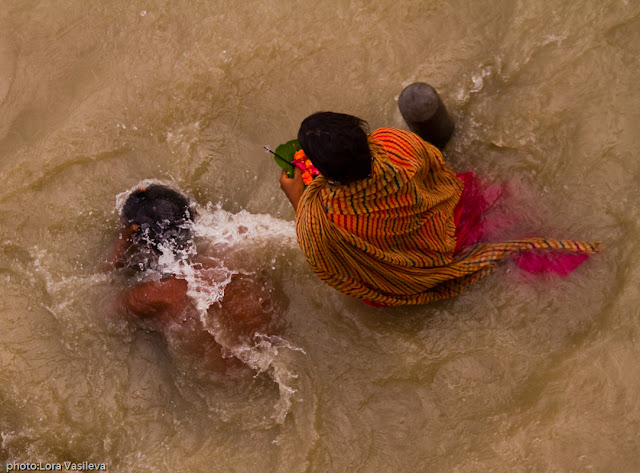 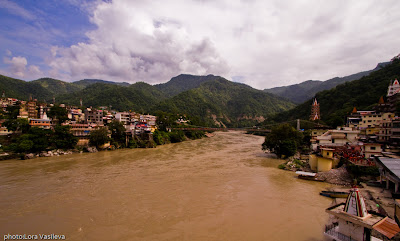 Rishikesh - the city where the Beatles stayed at the ashram of the Maharishi, was now the yoga supermarket of the planet. Here you can find all kinds of ashrams -  from tent camp near the Ganges to vast complexes the size of a small village offering all types of yoga, meditation, promising the truth. Here the festival was less crowded and we enjoyed less attention from the locals.We stayed in an old, large ashram on the banks of the with a wonderful rooftop that overlooks the river, ideal for yoga and relaxation away from crowds.I tried yoga with our baba but the yoga hall was too crowded with foreigners. All this madness was too much for us and we decided to seek enlightenment in the in the north. We caught a bus to Kasol and slowly entered into another India. The dirty, muggy air of the city was replaced with cool fresh mountain air, the smell of feces is replaced with the smell of charas, the noice of the festival crowd -  with the sound of the river and birds singing. 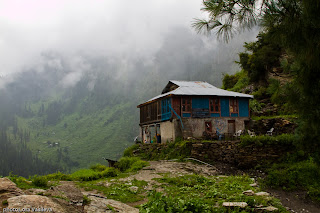 Kasol is the main backpackers village in Parvati Valley - the valley of the wife of Shiva. Here for the first time we met the Israeli crowd that was more numerous than the locals. Some of them had  just finished the 3 years of military service (for girls 2 years) and found in India for the first time complete freedom. Here we met the biggest junkies we had ever seen. They sat for months in this village, smoked constantly and sought enlightenment in chillums and chemical gurus. Restaurants offered Izraeli cuisine and you hear Hebrew everywhere. To our great surprise we met some Bulgarians here and with great pleasure we talked in Bulgarian for a few days. We met the  youngest Bulgarian in our journey - one year old Yulen, who was born in India and hadn’t set foot on home land yet, but he seemed extremely happy here. We did some one-and two-day hikes in the valley - to KirGanga - sacred hot mineral spring in the mountains and to Malana - a strange village where you have no right to touch the people, their houses or their crops (otherwise you risk being fined) and the children were shouting "no touching, no touching" 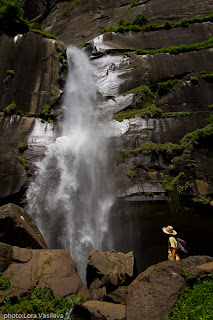 We stayed in Kasol a week in a lovely house near the river with a large garden and apple orchard. We cooked in the fire, listening to music, talking with our Bulgarian friends ... could it be more perfect ...
Here, however, it rained quite often and it was not nice for a long trek, so we continued north to Jammu and Kashmir, where now is the perfect season. We stayed several days in Manali, bathing in hot springs and cold waterfall. From there we started hitching to Leh on the most crazy and high road we had ever seen. Over 550 km, cut into high mountain with three passes up to 5360 m altitude. Just the thought that you can go to that height with a car is terrifying. Here are the highest motorable passes in the world - the first is Kardung La 5606m. , north of Leh and the second is Tagnag La 5360m., on the road Manali - Leh. The road is only open three months a year - from July to September. Cars are moving slowly and carefully, because any mistake here is fatal. It was the most beautiful but also the most dangerous road in the world. The local road organization BRO (Border Roads Organization) tried to make the trip safer with funny signs: 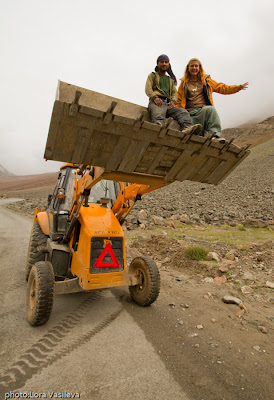 Better late than never,
Driving faster can cause disaster.
After whiskey driving risky.
Time is money but life is priceless.
No hurry no worry.
This is not a rally, enjoy the valley.
Life is a journey. Complete it.
Better Mr. Late than late Mister.
3 enemies of the road- liqueur, speed and overload.
Speed thrills but kills.
Start early, drive slowly, arrive alive.
Left is right, right is wrong.
и любимата ни: “Smile, please!” :) 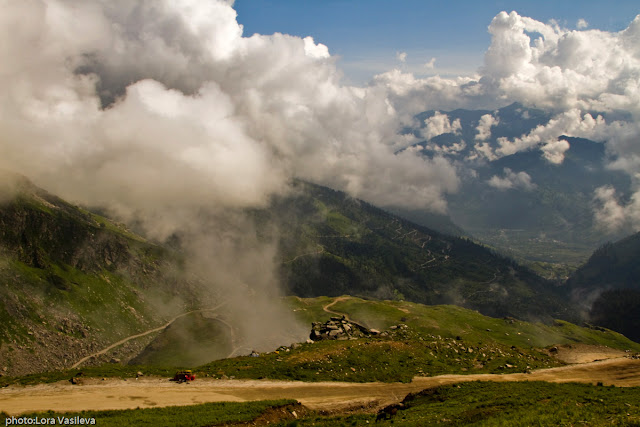 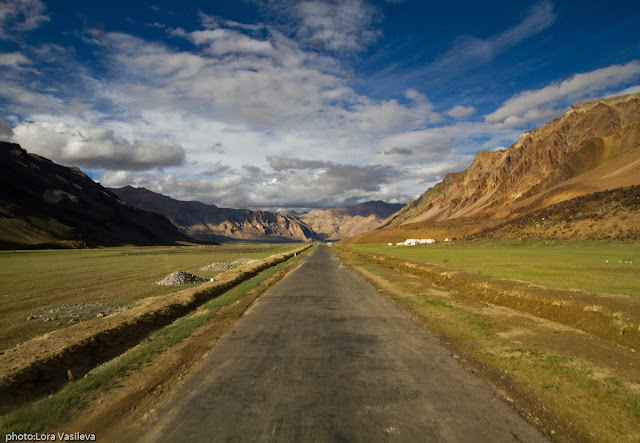 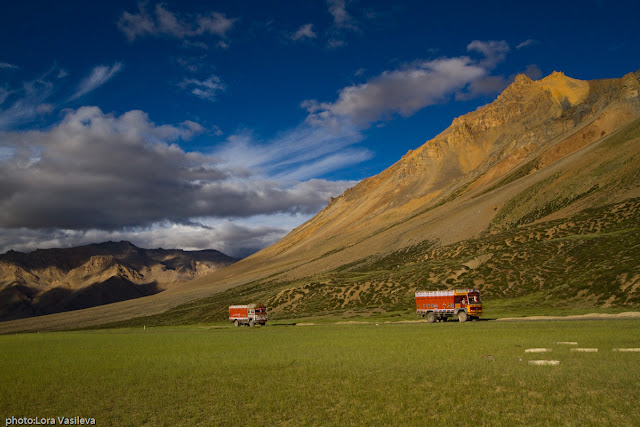 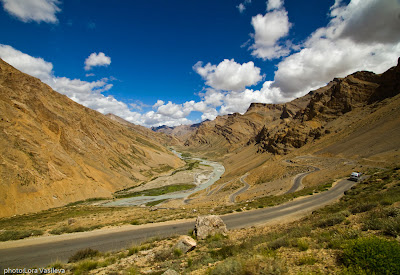 The road is still not paved and doesn’t allow fast driving. The trip takes about two days with bus, but the trucks were driving nonstop for 25-26 hours. We wanted to enjoy the views and travelled slowly for 4 days.

On the exit of Manali the first car quite quickly – students from , going for a walk to the first pass – Rotang La with a rental car and adri ver. The best is to have a professional driver here. And yet we did not go far. Shortly before the pass the road turned into a muddy river and even trucks sank. Cars skated up and down trying to climb, but it was difficult and dangerous and most of them turned back. Our car also went back (after a series of photos with us) and left us in the middle of nowhere. Fortunately, after 5 minutes the local bus Tata saved us. This buses never give up and climbed boldly at the muddy turns. There was a bus only once a day and we decided not to miss this chance. The ride in the back seats was like a rodeo, but the beauty around made us ignore the fear. We survived the long 80 km drive to the next village Keylong. The next day we went walking along the road until the first truck took us with two funny guys - Manu and Ringo from Himachal. The driver was only 20 , but was skillfully spinning the wheel in the sharp turns. Indian Tata trucks are extremely funky outside and from the inside usually they look like mobile temples. This was a Hindu one. Blinking, flashing, ceramic, plastic, plush, bright gods they were looking at us from the windscreen covering half of the front window. Outside it was colorfully painted and on the back there was the most important sign: "Horn Please". The constant beeping is mandatory both in the city and on the country roads. We had great fun with Manu and Ringo all day.Listening to loud Punjabi music stopping for tea and photos and they even took us to their friends, working on the road, with whom we also drank tea, made photos and lifted me up on their excavator! 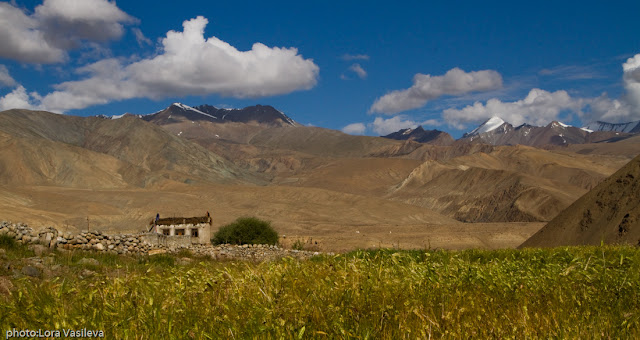 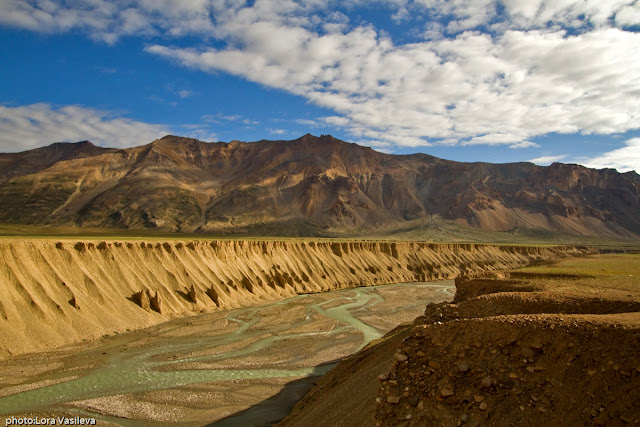 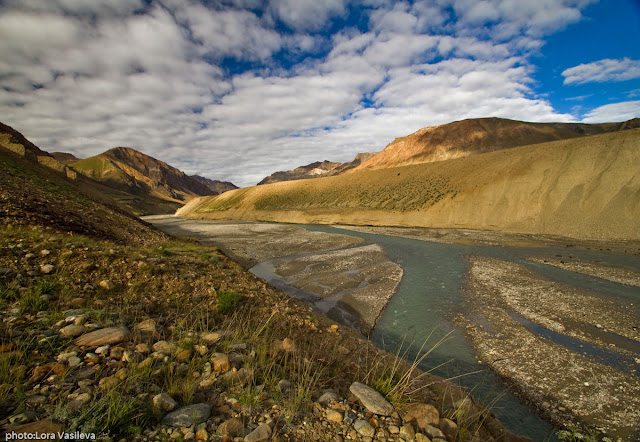 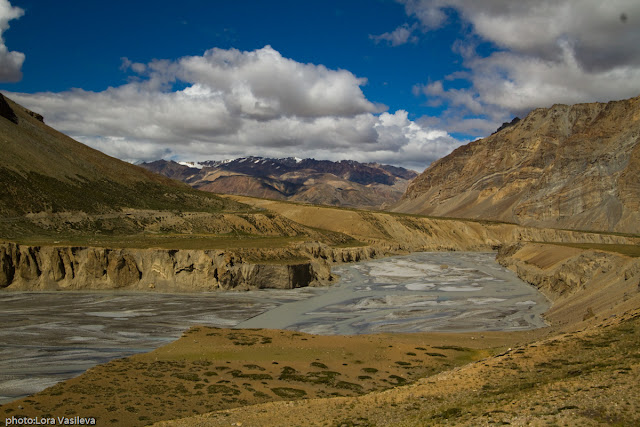 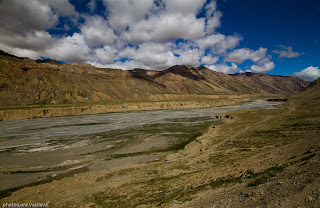 They left us before Sarchu on a wonderful green meadow near the river. We camped there and in the morning continued with the next truck. We stayed one more night along the road and on the fourth day we arrived in Leh with a truck, a military truck and a car with a Tibetan artisan who left us right in the center. Here the sky is blue, the mountains - high and dry and we were ready for a new Indian story.
Published by Unknown в 7:42 PM 3 comments: